I decided to create this TaylorMade Spider X Copper/White 3 putter review after having experienced improvements to my short game that I would have otherwise thought to be impossible. While I normally encounter few issues with longer shots, I have always suffered when approaching the hole. Not only was accuracy a real concern, but the ball often lost speed during the final few moments. Let’s take a quick look at how the Spider X was able to address these problems.

Things to Consider Before Buying the TaylorMade Spider X Putter

One of the core features of this product is its use of cutting-edge materials and the presence of precision craftsmanship. In other words, this is not a putter for novices (due partially to its rather hefty price tag). It is instead created for those who already know what might be lacking in their short game. The head and shaft are designed to achieve a subtle sense of precision; particularly in reference to hitting the “sweet spot” as well as to putting with a more constant level of force.

Having said this, it also offers a highly intuitive feel which enables players to gain better feedback if they are looking to make slight adjustments to their game. A more forgiving head aids during such circumstances, but this does not necessarily signify that amateurs will be able to tell the difference. This is actually one of the reasons why I chose to upgrade to the Spider X; having felt that off-of-the-shelf putters could no longer improve my game. If you have reached a point in your golfing career that you feel confident enough to step up to a professional-grade putter, the Spider X could represent an ideal solution. Let’s now take a closer look at what is in store.

The TaylorMade Spider X is a next-generation putter which has combined engineering and physics in order to create a one-of-a-kind playing experience for those who are looking to obtain a greater level of accuracy and consistency during their short game. The main principle behind this club is that the developers have designed it to incorporate a higher moment of inertia (MOI). This is critical in the event that the ball fails to make contact with the sweet spot of the head. Superior alignment and improved control are two direct results of this approach.

This putter is also quite balanced due to a slightly heavier head than previous models that is combined with a lightweight shaft. Once again, this tends to focus upon the ability of a player to achieve more precision during challenging shots on the green. The use of space-age materials alongside re-engineered mass properties have combined to create a putter that is truly a cut above the rest. Some of its core benefits include:

Now that we have taken a look at the basics, let’s move on to a more detailed description about the TaylorMade Spider X Putter.

The Colours and Patterns

There is no doubt that TaylorMade has always produced impressive clubs in terms of their sheer aesthetics. This is why the entire series is arguably one of the most popular on the course today. The Spider X model has certainly lived up to its reputation. The copper and white design of this series is stunning from a visual point of view and yet, it is not all about beauty. A solid black line through a white centre pod provides an excellent way to align the head of the putter to the ball immediately before a shot; providing a greater degree of accuracy and visual acuity. However, this is only the beginning. 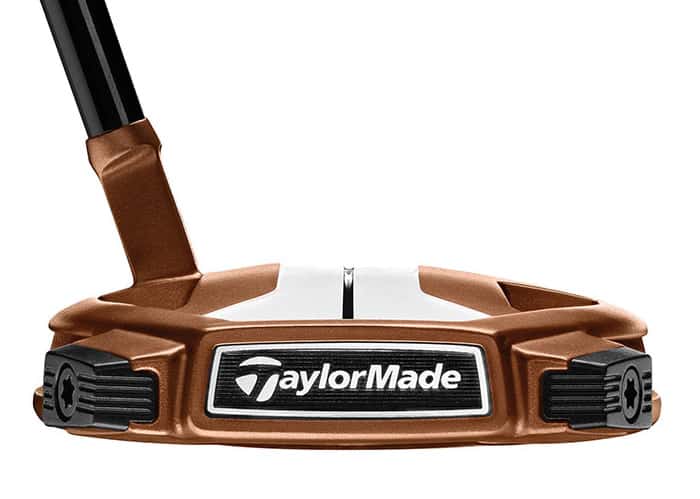 Flexible Weight Ports in the Rear

One of the most notable improvements involves the addition of weight ports of different sizes. Users can choose from 2, 6 or 12-gram weights depending upon their needs as well as how much additional stability they are looking to achieve (1). This is also critical in terms of achieving a higher MOI when the pressure is on while still being able to ensure that the ball does not lose a great deal of speed when presented with a challenging hole (such as a pitched lie). It should be mentioned that clubs which are purchased from the United States provide the option of including 12-gram tungsten weights. 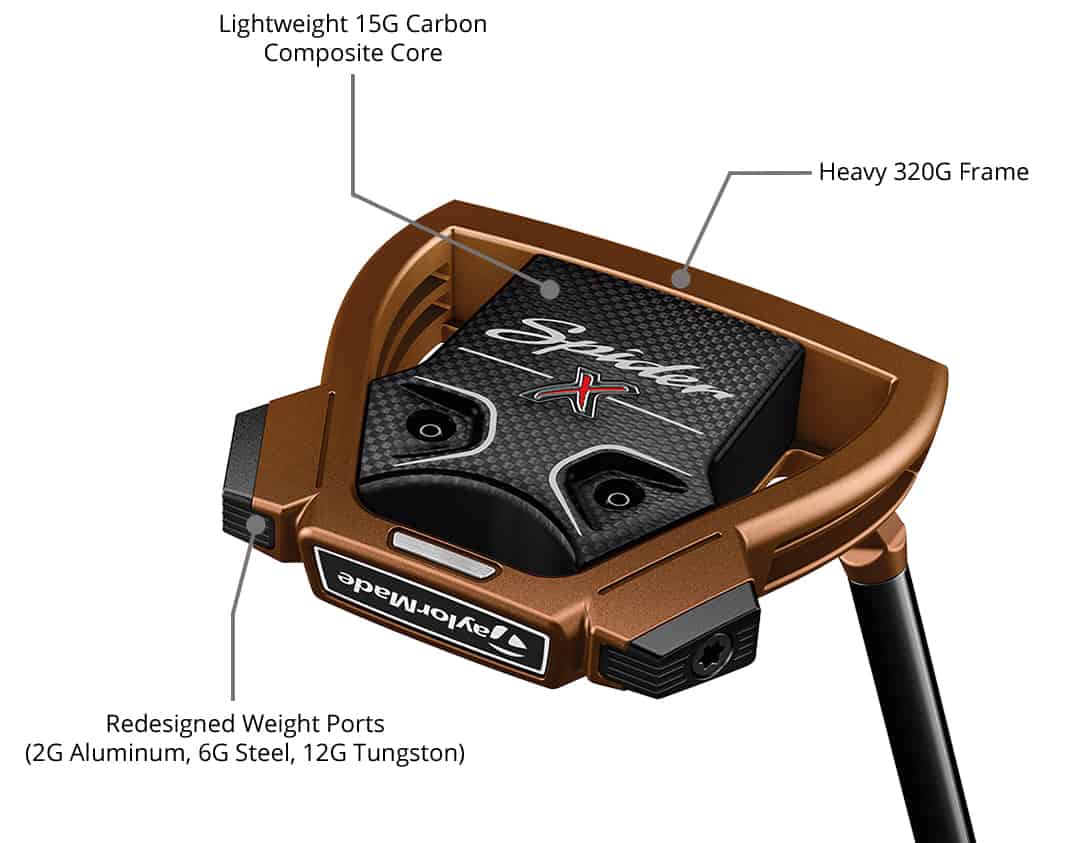 While less visible than the weight ports in the back of the head, the inclusion of a composite core is just as revolutionary. It is interesting to note here that the putter itself is actually said to be five per cent smaller and yet still able to retain the same MOI as previous models (2). What type of wizardry is this? The reason for this observation revolves around the fact that the core weighs a mere 15 grams. This has allowed the engineers at TaylorMade to extract mass from the centre of the club and place it around the periphery of the putting head. In fact, the weight has increased from 30 per cent on previous putters to a full 36 per cent on the Spider X. This should also please players who were wary about choosing a larger putter.

While not as visible as the enhancements made to the head, TaylorMade has upgraded the shaft of the Spider X. Known as the CT Tour putter, it contains a number of internal weights in order to improve stability. At a weight of 120 grams, it is also the stiffest shaft to date produced by TaylorMade (2). The theory behind such an approach involves the fact that putter heads have been increasing in weight during the past few years. Thus, a stiffer shaft helps to ensure that excessive twisting will not take place during a putt.

What About the Face Insert?

We often hear about groove technology when speaking of wedges due to the fact that they tend to add more spin to the ball upon contact. Let’s also not fail to mention that TaylorMade has adopted this very same feature to the face of the Spider X. The insert is now a full 5 millimetres deep and many believe that it provides a softer feel in relation to previous versions. This feel is also likely to provide slightly more responsiveness in terms of feel and control.

Like other golfers, I have been plagued with high handicaps when putting. One of the main reasons for this was the relatively small sweet spot associated with many putters. The engineers at TaylorMade seem to have taken such a frustrating situation into account. The Spider X was utilised in tests to determine how the best players fared in regards to sweet spot accuracy. It was found that some of the top names in the sport miss the centre (on average) by up to 1.5 centimetres when faced with a 12-foot putt (3). In other words, those who tend to hit between a range of 3 and 4 centimetres will likely find the Spider X to be more forgiving. This is obviously great news for somewhat high handicappers such as myself.

TaylorMade scoured through years of putter data when designing the Spider X. They found that approximately 66 per cent of all golfers tended to strike the ball near the toe (4). This obviously presented an issue in regards to accuracy and reliability. The decision was therefore made to include an optical system known as True Path on the crown of the club. In essence, True Path involves the inclusion of a sight line that improves focus and enables players to envision the path of the ball once it is struck by the face. It is also said that this addition helps to improve concentration during longer golf outings. 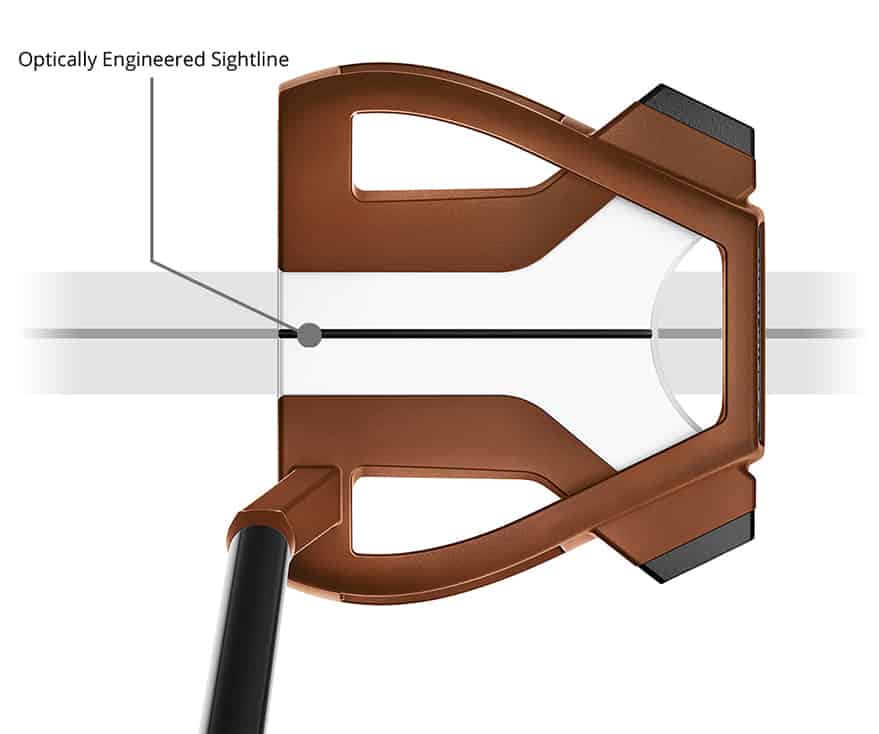 A Choice of Offsets

Users can likewise choose from a full offset or a 3/4 “hosel” model. This will essentially involve whether a player wants a 30-degree toe hang or a balanced striking face. Such angles could also make a difference when dealing with pitched terrain. It should also be pointed out that players who employ an arc stroke will generally benefit from a 3/4 offset, as face closing is the same while the previously mentioned MOI has not changed (3).

Of course, it is also just as important to appreciate what industry leaders as well as well-known players have to say about the Spider X. I spent a good amount of time collating a few quotations from across the Internet. Let’s take a quick look.

...there’s a group that wants something that more closely resembles a modern mallet, which is exactly what we were going for with Spider X.

New shape, new face, and a new alignment system. It’s not a radical overhaul by any means, but the Spider X is definitely not the same ol’ TaylorMade golf putter either.

The performance benefits of the original are still here, but the aesthetics are massively upgraded to appeal to a new audience.

Editor in Chief at PluggedInGolf.com

How does the TaylorMade Spider X Putter compare?

The Odyssey EXO Rossie has incorporated a host of composite materials to create what many believe to be the most forgiving putter on the market today (6). A weight focused around the perimeter and a consistently high MOI are two key features of this club.

While a bit pricey it could be the perfect option when only the best will do. Core features include: Superior levels of forgiveness. A lightweight head and crown. Excellent levels of speed an accuracy. 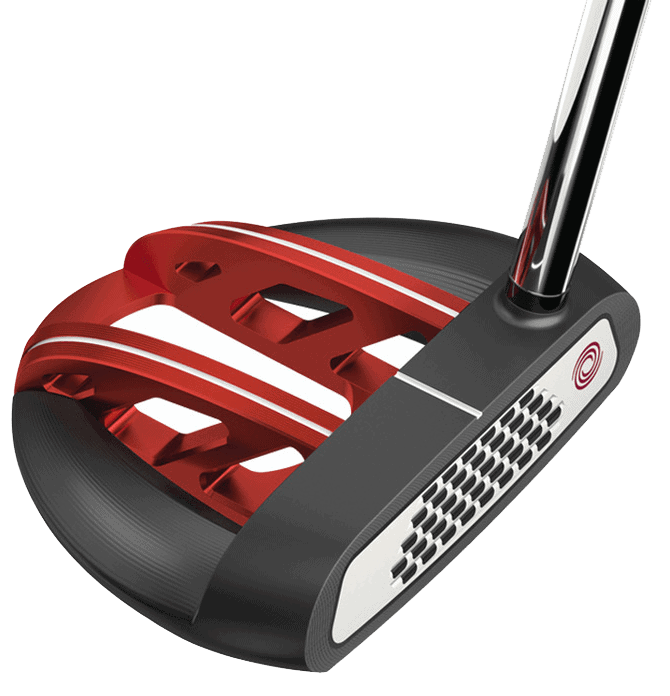 EVNROLL made golf headlines in 2016 when the firm first introduced fully milled putters onto the course; especially their proprietary “Sweet Face” approach to the face of the putter. The main intention is to employ scientific precision in order to ensure higher levels of accuracy thanks to the use of standalone milled patterns.

This putter could also be a great alternative if you want to stay away from the larger mallet configuration. Some key takeaway points include: Zero dispersion when hitting the ball. Uniform accuracy over the entire face of the putter.  A “Gravity Grip” that helps to ensure a square angle upon contact. 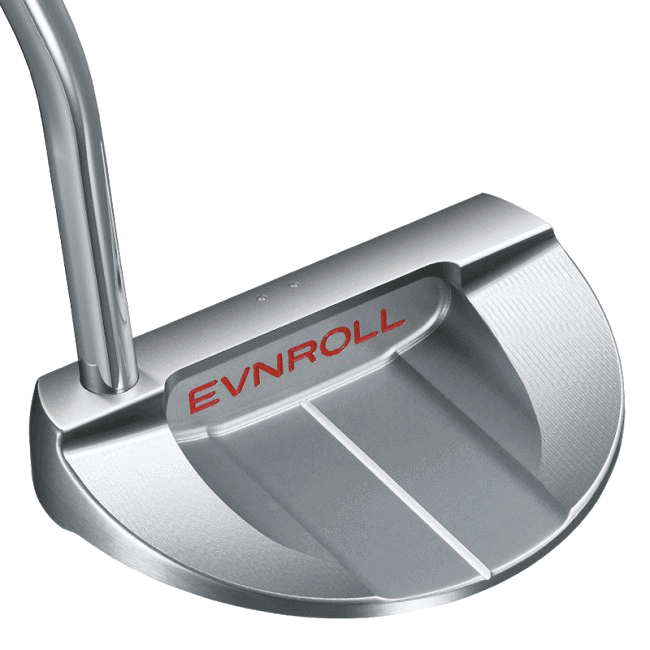 The Phantom X series offers a choice of nine different putters, so the chances are high that you will find what you are looking for. There are five different head configurations as well as a number of shaft angles, so the Phantom X is arguably the most versatile option on the market.

A handful of interesting features include:  A solid milled aluminium putter face. Technology to dampen vibrations when putting. Improved feedback and sound when putting. 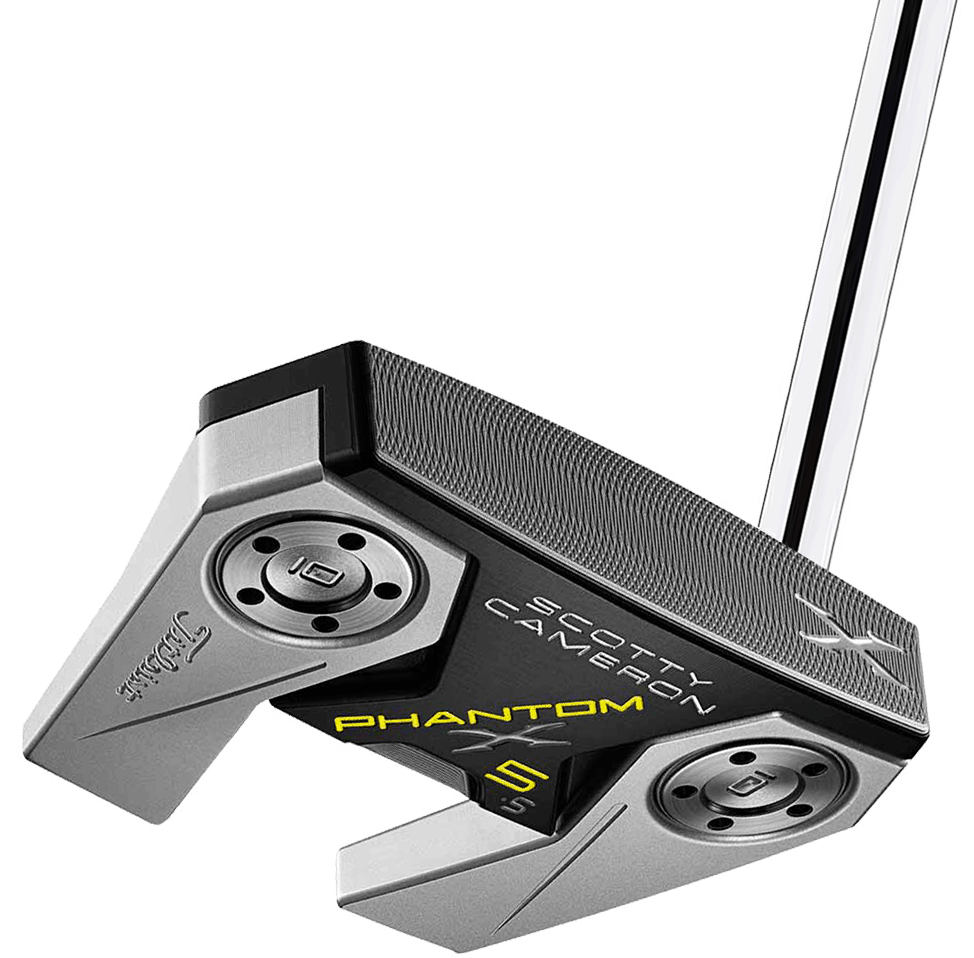 Should I buy the TaylorMade Spider X Putter

As can be seen within our TaylorMade Spider X Copper/White 3 putter review, this new club brings an impressive number of features to the table. If you have been looking for a greater degree of forgiveness or should you require a club which boasts a higher MOI, the Spider X is the ideal solution. 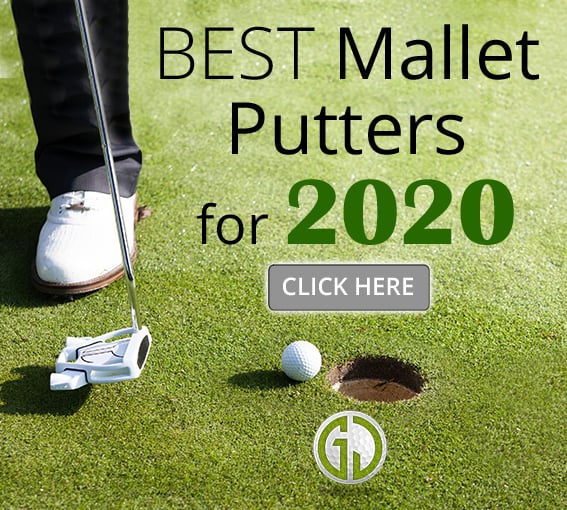 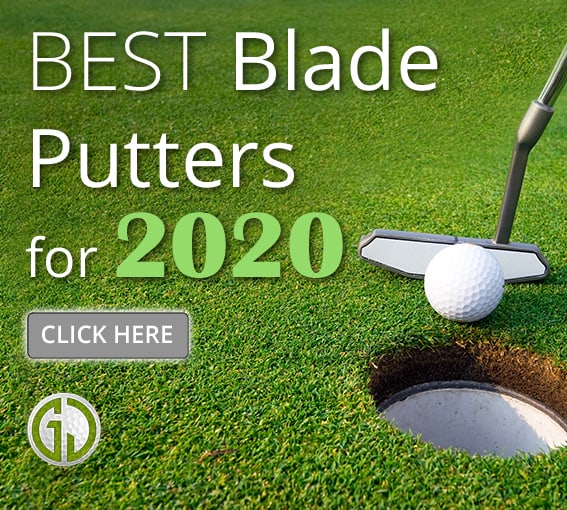 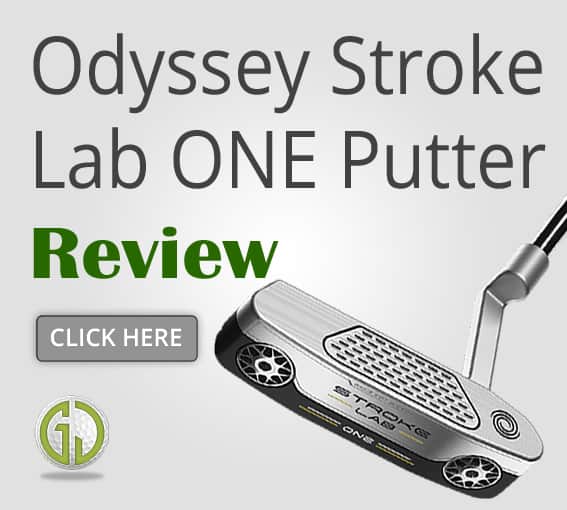 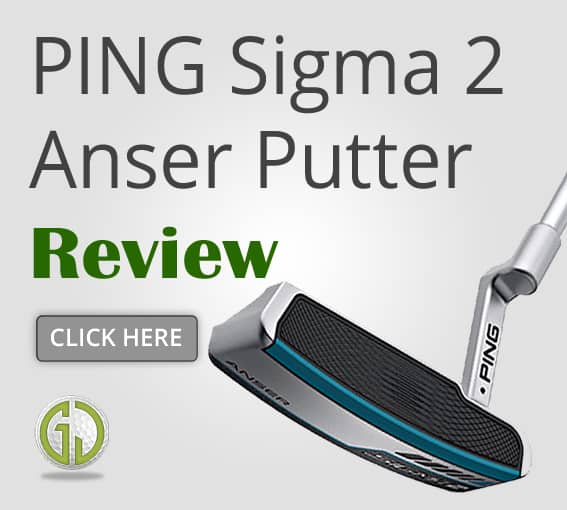 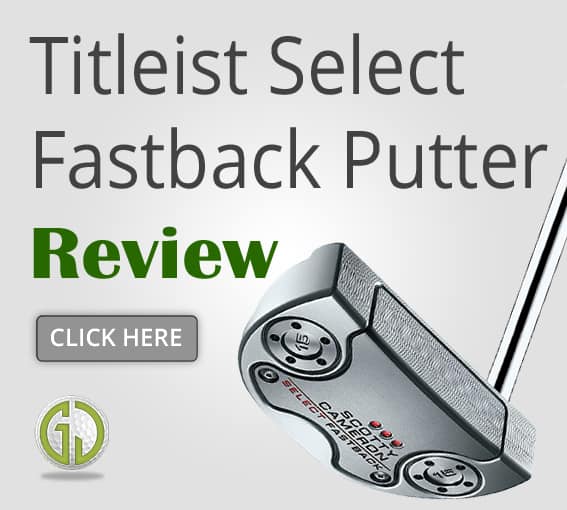